The Sun Trip is a showcase for new forms of mobility. Each adventurer is an ambassador of solar energy and eco-mobility, proving their efficiency and their humanist dimension.
Follow us
Sun Trip , Sun Trip: the world on solar bikes!
EN FR
2021 Registrations

The pandemic crisis that has struck the world in 2020 has not allowed us to maintain the second edition of the Lyon-Canton.  But this dream of a solar race across Eurasia will be pursued in 2021.

Please have a look at this statement about Sun Trip 2021 route. In case China is still thought to be a too risky destination, the 4th edition of the The Sun Trip adventure would take place on other routes. We have already announced to the sixty participants to date, that we were reflecting on the subject and that this alternative route would certainly be in Europe. 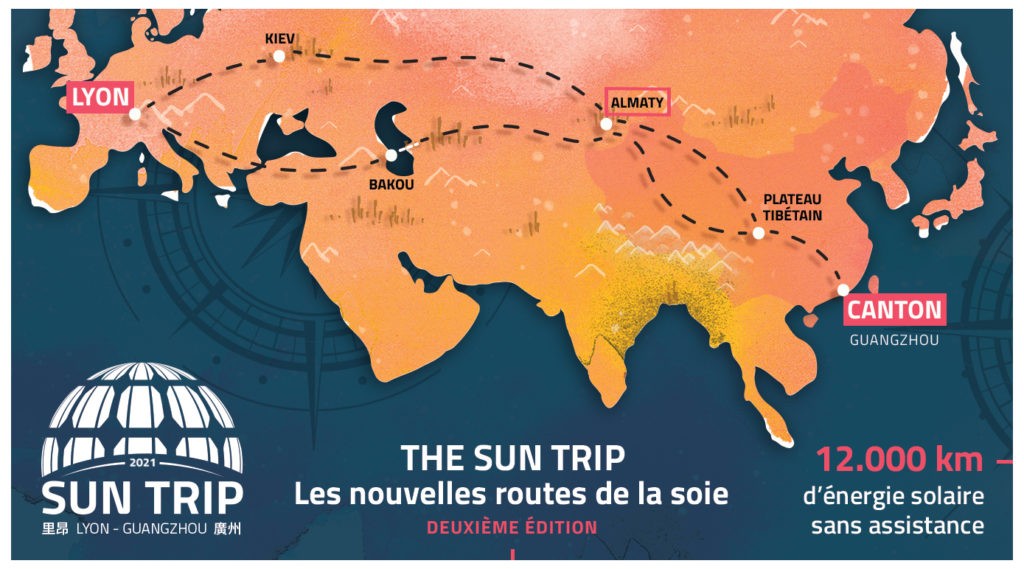 This will further confirm Lyon-Canton’s position as the biggest land adventure on the globe.

The 2021 Sun Trip itinerary offers several new features, such as the introduction of “gateway cities” but most importantly the creation of a Chinese checkpoint, obliging participants to go through the Tibetan plateau.  A significant difference, with a passage at an altitude of 4600 meters high! The distance is estimated between 12 500 and 13 000 km.

With this itinerary, it will be hard to compete with the 44 days which Raf Van Hulle (winner of the Lyon-Canton 2018) needed to win the race, but nothing is impossible when on the Sun Trip.

The 2021 edition will also have a half-itinerary option, with an arrival at Almaty (Kazakhstan). This adventure, covering 7000km of which 3500km will be riding through the steppe, is open to 15 teams maximum.

To date, the prologue project Frankfurt-Lyon is still to be confirmed.

Organised on the historical Terreaux Square in Lyon, thanks to the kind contribution of the city council, this event will be the opportunity to introduce the adventurers, the bikes, the sponsors and to celebrate the adventurers leaving for the other side of the world.

The official start date will normally be set at the beginning of June 2021. The precise program of the event will be announced later. Objective: to offer a festive event for the general public which will launch the adventure!

Towards the real departure point: Savoie (places and dates to be confirmed)

This operation will allow them to reach the mountains in Savoie, where the real start will be given.

We are thinking about the possibility of creating a prologue open to all, to allow followers and partners the opportunity to ride with the group during these days.

Based on the pace of the 2018 edition, we can imagine that the Chinese border will be reached before the end of June and estimate the arrival at Guangzhou before mid-July.

In China, adventurers (competing for the Solar Challenge classification) will have to go through a checkpoint located on the other side of the Tibetan plateaus, in a remote district of Sichuan Province. It’s worth noting that a 4,700-meter high pass will be on the program. 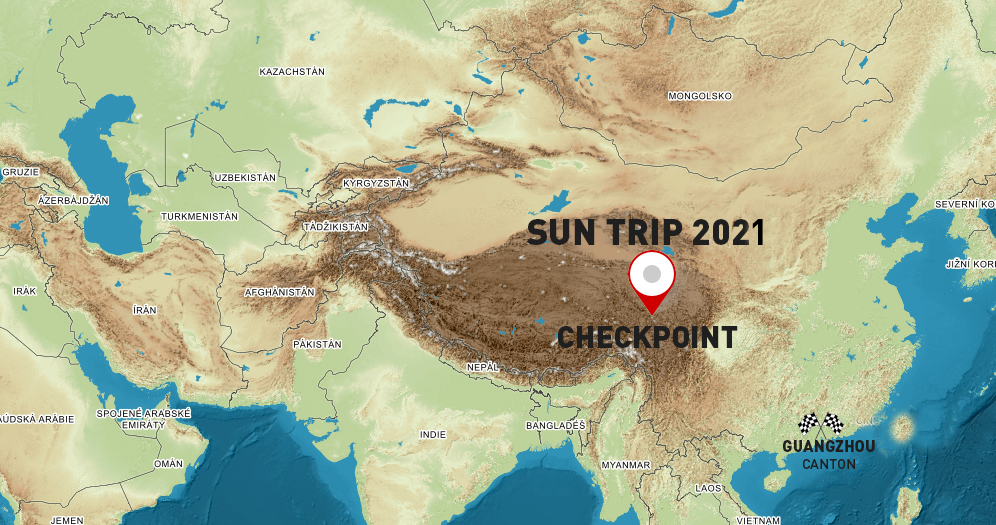 Freedom of itinerary: the conditions set by the organization

The Sun Trip adventure is only possible if the adventurers respect the areas prohibited by the organisation team. This map summarises the main rules imposed on participants.