Find on this page the news concerning the arrivals of the Sun Trip Europe, in Lyon. We are talking here about both the participants of the half-course and the full course. The half-course does not include a “race” dimension.

He did it! Herman Segers arrived in Lyon on his birthday and finished after 77 days of adventure. He was the last participant in the race.
After a stolen bike, an accident and above all a major breakage in Valencia a fortnight ago, Herman did what was necessary to finish his great Sun Trip Europe just in time.
Let’s remember his good initial performance with the 4th position he held throughout the race.
He had already finished 5th in 2018 in China.
A certain tenacity that we particularly congratulate.

A 3rd velomobile at the finish! Arnaud Negrier finishes his Sun Trip Europe. He is the 9th at the end, 11.000 km realized in 73 days and 2 hours. Congratulations for his tenacity!

Living in the Lyon region, he was awaited by his relatives, as an anti-sanitary pass demonstration arrived on the Place Bellecour.

He finished this edition in 72 days and 1 hour and will be ranked in 6th position of the Sun Trip Europe solar challenge (the validation of the ranking by the jury will be done after the arrival of the last one, after examination of all the claims).

Moreover, by finishing this Sun Trip Europe Dirk exceeds the 50.000 km milestone on solar bikes. He is more than ever the king of the Sun Trip! Congratulations and thank you.

Arrival of Patrice Plozner, initially participating in a team with Jean-Louis Machado, who has been riding solo since the explosion of the team in Romania (which led to his exclusion from the challenges). Patrice is the 7th to reach the finish of the great Sun Trip (6th in 100% solar recharge), some 11,000 km in 70 days and 20 hours, at a daily average of 160 km, with 100% solar charging.

In the second part of the adventure he showed that his bike was capable of great performances, with a peak of 324 km in one day in Spain.

Today we welcome  3 participants for their great Sun Trip: Pirmin Bütler who arrived this morning, and Baudouin de Hemptinne and Géry Gevers from Team John Cockerill this afternoon.
They finish their trip in 61 days, and are back with their families who were waiting for them impatiently.
All three have done well in their first Sun Trip. Congratulations also to Sun Tripper Alessandra who met up Pirmin today, after following him half way.

After setting off from Lyon on 1st June with the prologue, Robert Lucas completed his half Sun Trip in 77 days. With an average of 130km per day, he progressed serenely throughout the route. In spite of a fall that earned him a few stitches on his knee, Robert arrives in great shape and says he is ready to ride the rest of the route, at his own pace, without competition.
At the age of 71, he is completing his first major trip on a solar bike, after many trips on a “traditional” bike to almost every continent. Bravo for his determination. 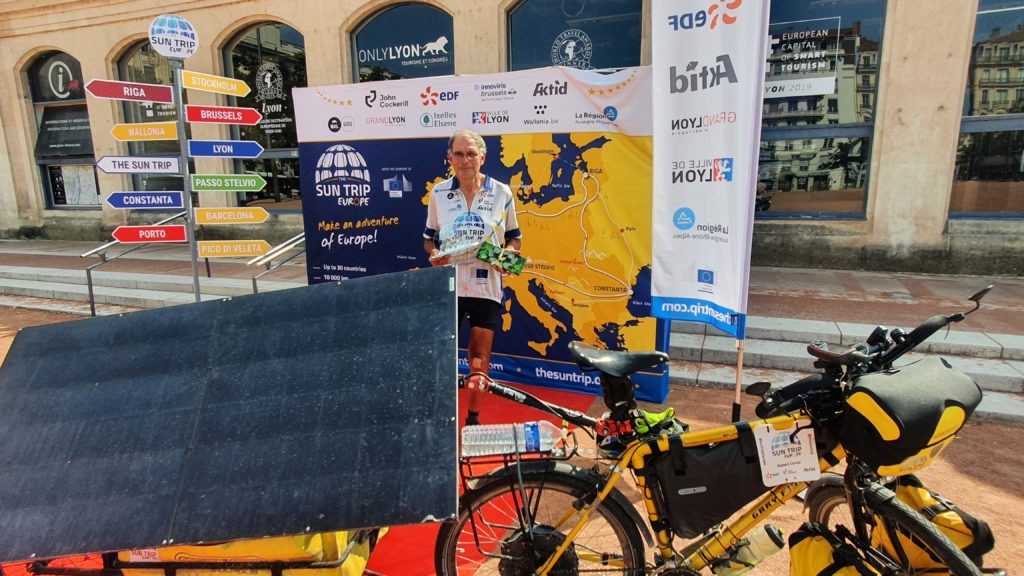 Michel Bertet finishes his remarkable journey in 4th position in the 100% solar ranking, with an average of 200km per day, in 59 days. More than 10,000km covered with very few technical constraints overall. A great performance, in line with his 2017 (ST Auvergne-Rhône-Alpes) and 2020 (ST France) editions. 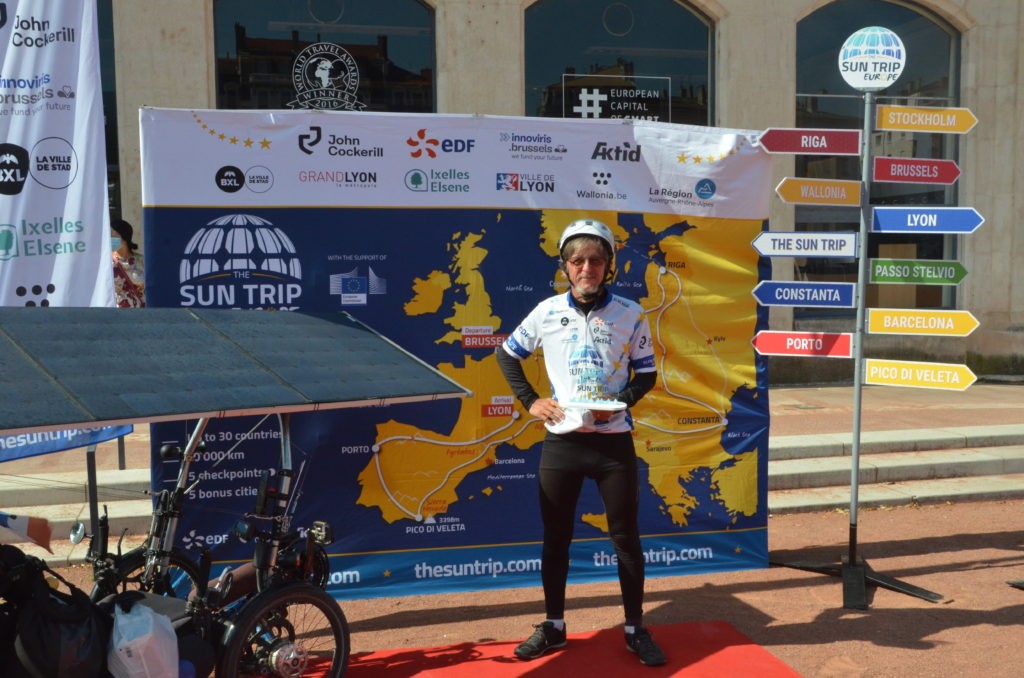 After a first “tour de France” in 2020, Sofia and Nicolas are completing their first Sun Trip after 57 days of adventure. It is in solar tandem that the two Normans decided to travel after having visited more than 10 European capitals. Following a knee injury for Nicolas, they had to review their itinerary and chose the half Sun Trip.

“The Sun Trip is a great challenge for us to promote eco-mobility by proving that even an adventure to the end of the world doesn’t require fossil fuels but courage, imagination and a bit of madness, as well as the challenge of building a sustainable future for our planet. This adventure offers a unique opportunity to inspire the media and the people we meet by being ambassadors of this spirit.

After 57 days of adventure, the two newlyweds finish their Semi Sun Trip with a smile. Daniel had already participated in the Lyon-Canton edition in 2018, so this was the opportunity to do it again accompanied by Sibylle. They have travelled more than 10,000km from their home in Switzerland, and are now ready to return. A nice way to conclude this most atypical “wedding trip”! Photos and interview :

Didier Vandenhove of the Enersol Team receives our congratulations for the end of his half Sun Trip in 55 days, after the multiple adventures you may have followed on his page 😉 Good luck to him who is going back to Belgium, on the tracks of the prologue.

As a duo from Constanta, they arrived in Lyon under the rain but with a smile on their faces. Due to time constraints, the two finally opted for the Half Sun Trip. Stéphane did it 100% solar, and Jean-Louis with electric assistance. Jean-Louis has passed the 10,000km mark since his departure from Hyères. A little less for Stéphane. They both finished the adventure in 53 days.

The German decided to shorten his adventure by skipping the Iberian part. He finished in 38 days, at an average of 180 km per day, in 100% solar recharge.

37 days, 1 hour and 45 minutes, this is the time of Bernard Cauquil (Team Aktid), magnificent 3rd of the Sun Trip Europe solar challenge! Winner in 2015, Bernard never gave up on this 2021 adventure. He finished with a daily average of 300km! “Huge!”.

The day after the arrival, we gathered the two champions of this European edition. The reception took place on the Place Bellecour, in the presence of François Gaillard, general manager of the Lyon Tourism Office. Jean-Marc Dubouloz is the 2nd French winner of a Sun Trip, and at 56 years old he is the oldest winner of the event! Emil Barbut, 36 years old, was the very first Romanian participant in the Sun Trip, a master stroke with a second place that will remain in the memories as the due was so beautiful.

Their performances mark the history of solar mobility and reinvent the capabilities of the bicycle. Try one day to complete this 11,000 km route by car… not sure you can do it in less than 20 or 25 days! The world is changing, and the Sun Trip is proud to be part of it!

Just before the arrival ceremony, a meeting with some young people in Lyon :

33 days, 2 hours and 45 min! Jean-Marc Dubouloz finished today at 4:45 pm his incredible Sun Trip Europe, an adventure of 11.000 km (finally). The daily average is 333 km (354 km if we remove the 2 days of cumulated break).
This performance is all the more extraordinary that Emil Barbut should be able to reach Lyon this evening, before 9 pm, with about 4 hours of delay! The smallest gap in the history of the Sun Trip!
The two heroes will participate together tomorrow in the Sun Trip Europe arrival ceremony, scheduled for 2pm on the Place Bellecour.

What a day! Emil Barbut finally managed to reach Lyon this Monday, July 19th, after a fabulous crossing of the Auvergne. He arrived at 8 pm, a little more than 3 hours only after Jean-Marc! A moment which will remain in the history of the Sun Trip!

We should see the first arrival of Sun Trip Europe participant (full race) this Monday, July 19 in Lyon. If a participant arrives this Monday, the arrival will be on this point goo.gl/maps/VHpY2zsMKGybZKDb9

But above all we give a public meeting on Tuesday, July 20th at 2pm on the Place Bellecour: goo.gl/maps/jPvT3146JBCNX8QEA

We should be able to do this arrival ceremony with the two leaders together. A great opportunity to come and meet our champions! 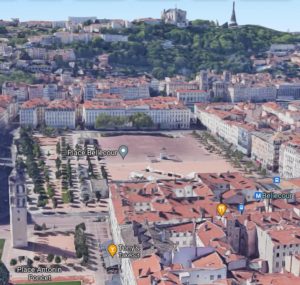 The two cousins finished their adventure in 26 days and 1 hour! With no experience of bike travel before the Sun Trip, they impressed with their level of performance and choice of route. They were the first to reach the famous Place Bellecour in Lyon, even before the leaders of the complete route arrived. Adventurers that we will certainly see again on the Sun Trip routes!