The Sun Trip is a showcase for new forms of mobility. Each adventurer is an ambassador of solar energy and eco-mobility, proving their efficiency and their humanist dimension.
Follow us
Sun Trip , Sun Trip: the world on solar bikes!
EN FR
ST Europe 2021

At first the Sun Trip was the idea of one man, but it could not have grown in size and scope without counting on the commitment of many people.

Created in 2010, the Sun Trip Association gathers and coordinates the volunteer support of former participants and friends. As the organizer, the Sun Trip Company has brought the event into legal existence since 2013.

Discover the main faces of those who have made the Sun Trip.

This first European expedition is born and with it a new team is put in place.

Nicolas Guzzo will take on the role of general coordinator with the help of Léo Vidal as project manager. Agnès Chappelet will help for partners relationship.

As every year, the team will be supported by a technical and logistical committee led by Christophe Bayard and Silvia Plozner.

The help of the active members of the Sun Trip association is also essential in decision-making on various issues related to the general organisation of the project, with the coordination role being played by Béatrice Cazanave (a Sun Trip multi-participant since 2015).

We also welcome the involvement of the Belgian participants Géry Gevers, Baudouin de Hemptinne, Dirk Huyghe, Raf Van Hulle, who are very involved in relations with the Belgian partners of Sun Trip Europe.

Finally, we would like to thank our partners, some of whom are taking on the role of co-organisers, such as the international relations department of the city and metropolis of Lyon, under the impetus of Guillaume Arnould. 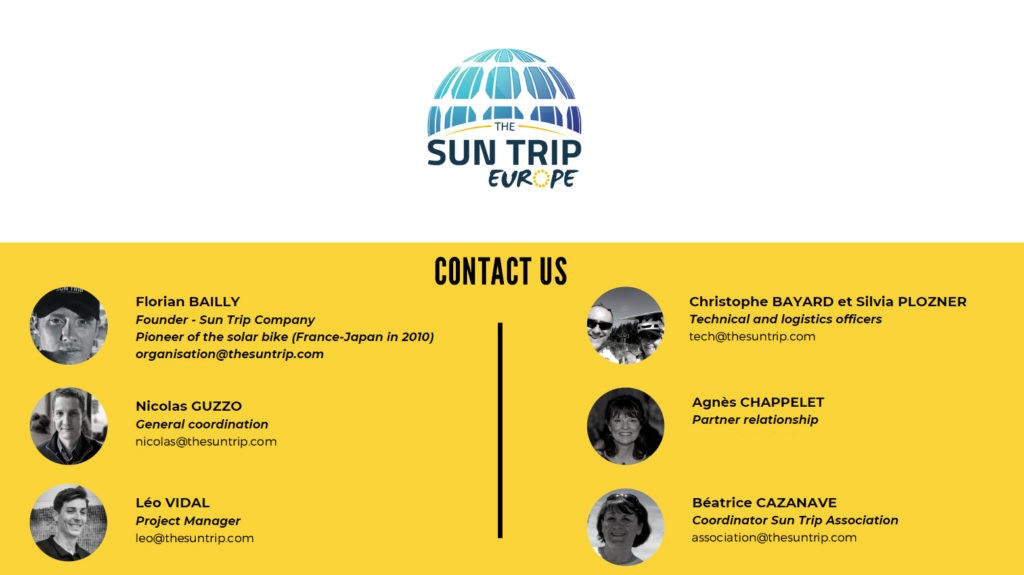 This special edition, set up in only two months, will bring together a tight team around Florian Bailly, manager of the Sun Trip Company :

Christophe Bayard: technical and logistics manager, accompanied for the occasion by Silvia Plozner and two members of the Vecolo association.
Béatrice Cazanave: participant, involved in the general coordination of the event, notably to liaise with the association and for the logistics of the Pau stage.

The second Sun Trip Tour is the joint work of a professional and volunteer team. This year certainly was the best when it comes to team logistics. In charge: Angélique Galvaing as coordinator, the Zeppelin Agency for photo and video production, Dirk Huyghe and Michel Bamps for logistics, the Vecolo Association for the mobile workshop, Olivier Reginensi and Paul Baudry for the technical support.

This crazy team was worth the best episodes of Dallas and that’s what we needed to launch the huge 2018 project! Angélique Galvaing held a decisive role as Project Manager and representative in Guanzhou. Ting Xie was our Guangzhou Advisor. Guillaume Devot worked as the CTO and snapped images too, Cédric Vinatier was the Association’s President, Thomas Pollet came for Web and logistical support, Ting Xie assisted us in Guangzhou, Olivier Reginensi as a Technical Officer, and Anick-Marie Bouchard as the Webmaster, CM, translator, and interpreter. 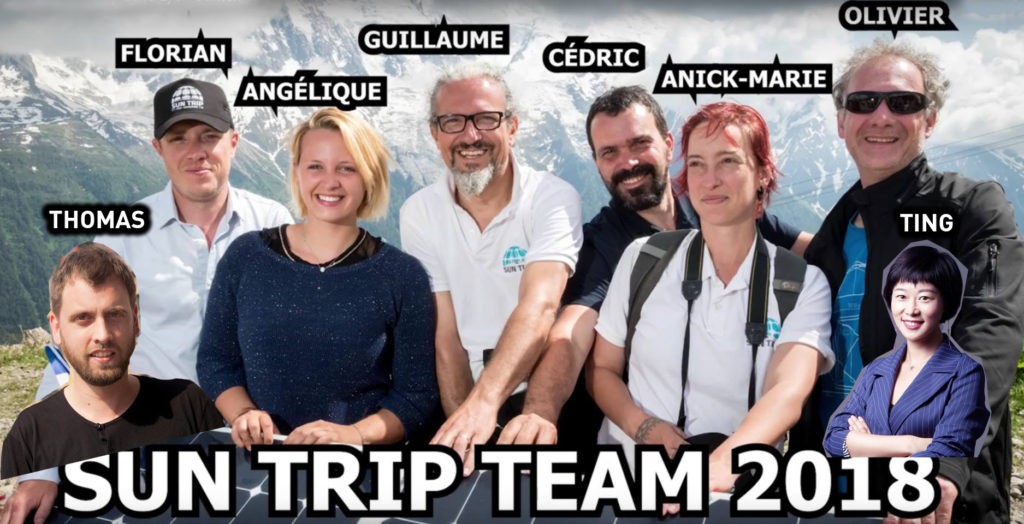 We get to a first turning point when several 2013 participants get involved and constitute the first Sun Trip Team! The spirit and the values of the event are crafted. There are daily team debates where each rule is debated with passion. Anick-Marie Bouchard acted as a super General Coordinator and our representative in Antalya. Guillaume Devot as a great CTO but also on the field snapping pictures with his wife Angélique Devot. Cédric Vinatier and Sylvain Machefert came in support for the general design, the logistics and the relation with participants.

Launch of the Sun Trip pioneer event essentially directed by Florian Bailly with help of some participants, Kazakh partners and his family members. 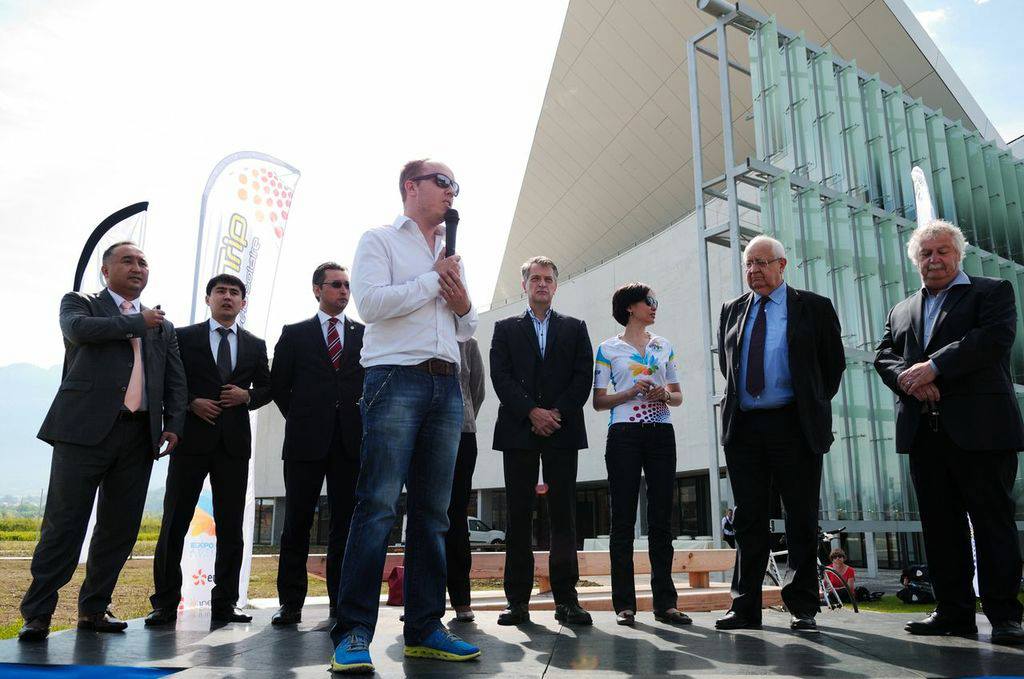 Florian Bailly and His Team in 2010 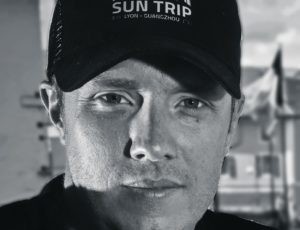 The Savoy native made his first solo bicycle travel in 2006 between France and China, but it was in 2010 that he carried the project “Sur la route du soleil levant”, a solitary 10,000 km adventure to Tokyo with one of the first solar bikes, a world first. There sprout the idea of ​​creating the Sun Trip back in France. 3 years later, he launched the first Sun Trip, between Savoy and Astana in Kazakhstan. The adventure was only beginining!

Technician: Olivier Wiss, engineer at INES – he designed the “Soleil Levant 1” bike. Patrick Pecchio and his team from Cycles Pecchio in Albertville, for the bicycle and accessories. The Burdin brothers of VAE Center, for the engines and the batteries.