The start of the 3rd stage was given on Thursday, June 23 at 10 am. The peloton stayed together between Andermatt and Disentis, over the Oberalp pass. After a last meal together, offered by Catrina Experience, the group headed for the next stage, Innsbruck in Austria, 300km further on.

As at the beginning of each stage, the yellow jersey was given to the rider with the most points on the climbs. Thanks to a good strategy the Frenchman Hugo Rousselot is now in the lead, with 550 points, against 530 for Emile Rivoire (Team GIANT – Hexatech) and 475 points for Sibylle Felder.

It is worth noting that on the morning of June 23rd, Emile Rivoire took points from the Furka pass, even before the group set off together on the Oberalp pass.

The itineraries then quickly varied, with the group of the best climbers heading for the Stelvio pass in Italy (awarded 100 points!), while some of the “arrows” decided to reach Innsbruck a day early… 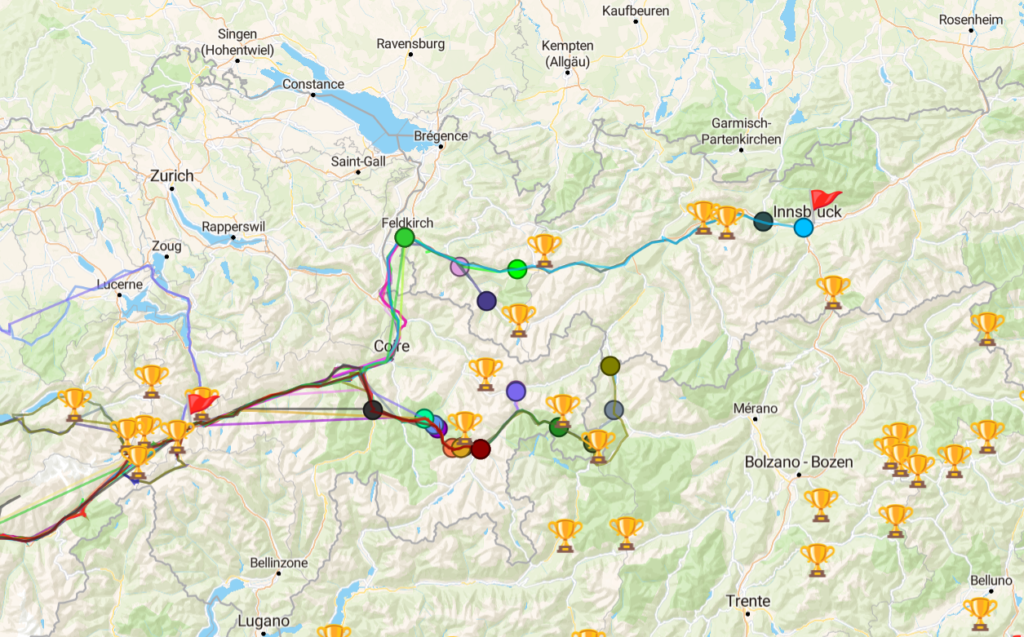 Kilian Weigand, on the road to the Stelvio!
Despite the heavy rain, the young German rider took the road to the mythical Dolomite pass in Italy. Before him Emile Rivoire, Hugo Rousselot and Stéphane Bujadoux had been able to count on better weather to reach the summit at 2757m!
On board his impressive cargo bike he gave his all to reach the summit. In the end, tired and cold, he confused the summit of the Stelvio pass with that of the Umbrai pass, located a few kilometres upstream, on the Swiss side! The organisation will decide later today how many points he will be awarded in the solar challenge. The Stelvio is normally awarded 100 points!

A special mention to Stéphane Bujadoux who crossed this pass again, after his ascent in 2021 during the Sun Trip Europe.

The two youngsters Emile Rivoire and Hugo Rousselot are also part of the courageous ones who reached this summit, one of the highest of the adventure!

During this stage we learnt that Steve Woolford, the Englishman in the peloton, preferred to cut short his adventure for personal reasons. We congratulate him on his journey and hope to see him again for a third Sun Trip.

On the other hand, Pierre Venzon from the EDF team decided to stop due to knee pain. After arriving in Innsbruck, Pierre will return to France by train and his bike will be transported to Bled for the EDF relief. Congratulations Pierre for this first participation, for your motivation and the hundreds of kilometres you have covered!

More than 300km after Andermatt, we welcome the SunTripers at the base camp located 15km from Innsbruck. It is under the sun and especially in the middle of Austrian folklore that we meet, the time to recharge and have dinner all together.