The Pico Veleta checkpoint (3360m) lived up to the myth! The highest paved road in Europe gave rise to a beautiful duel between the two leaders, wheel to wheel after 25 days of adventure! An epic day to relive with the pictures of Spanish photographer Ivan Luque. Mythical!

The two velomobiles left the infernal heat of the Spanish plain for a day and it was Jean-Marc Dubouloz who arrived first at the point where the road becomes reserved for bikes, at an altitude of 2550m. The wind was blowing very hard and Jean-Marc decided to wait for Emil Barbut, to finish together this extraordinary 42km climb! Thank you for the state of mind, the pictures are all the more beautiful!

The two leaders agreed to stay tonight in the Sierra Nevada. No time neutralization will be imposed to the participants who will arrive later.

Bernard Cauquil on the top. He slept in the climb after a 350km ride, then he was in the top early morning.

The great Belgian reached the summit in the late afternoon without too much difficulty. He took the time to let the clouds pass to climb with a well loaded bike, with a long break halfway up the slope.

The Frenchman is the first to be trapped by the wind on the most exposed part of the climb! Around 2600m of altitude his bike is knocked down by the wind! He took the time to remove his panels and then continued the climb to the summit, which he reached around 4pm. A priori no major technical damage and Michel was not injured, but he will remember it for a long time:
“Frankly, it was downright dangerous. There is a gully where the wind accelerates: on the way back I had to ask for help to cross it with the bike stripped of its panels. Then, until the top, the wind was so strong that I was always afraid. I had never experienced such a wind. This sunny day that was supposed to be a wonder turned into a nightmare”.

Stunning pics from the top of the Sun Trip Europe. Good weather but cold!

Géry and Baudouin post : “After 8400km and so many mountains: the Carpathians, the Balkans, the Dolomites, the Alps, the Pyrenees, we climbed in the Sierra Nevada in the South of Spain the Pico de Veleta. 2 consecutive days with more than 2200D+! 2 months ago, we didn’t even know this mountain existed. Today, we will never forget it. I had both thumbs “frozen” on the descent. I couldn’t change gears. This was our southernmost point of this SunTrip, and our 4th gate!”

The couple arrived at the summit of Pico Veleta at 1.15pm, halfway through their half Sun Trip, accompanied by their dog.”We did it !!! Magnificent !!! Thank you Florian for this choice, we love you! ” 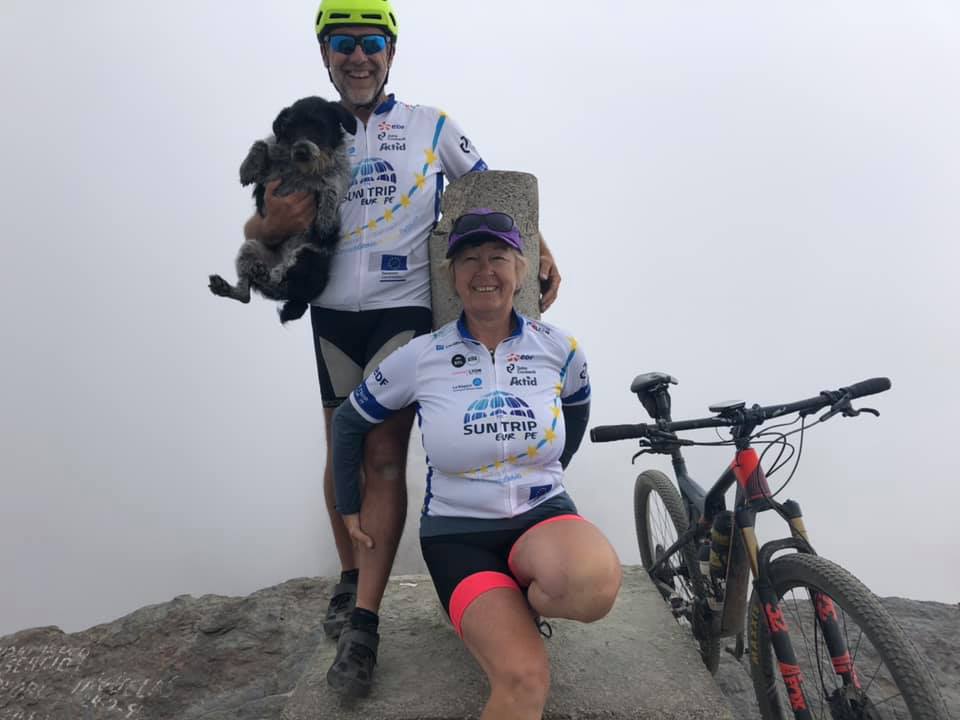 Dirk : ” It tooks a long time to reach the top because I started this morning with an almost empty battery.
Some times windy and little dangerous “
But I enjoyed it !! “
Patrice decided to bivouac at 2800m altitude. He couldn’t reach the summit today at 3.398m because of the dangerous wind.

At the summit at 4pm, with no wind and 15 or 18 degrees.
The return to the valley was more difficult 38 down with a gradual rise in temperature as the descent went on. Unfortunately Arnaud broke two parts of his bike near the hotel… A part of his suspension and a carbon part. He is not sure he can continue the adventure. 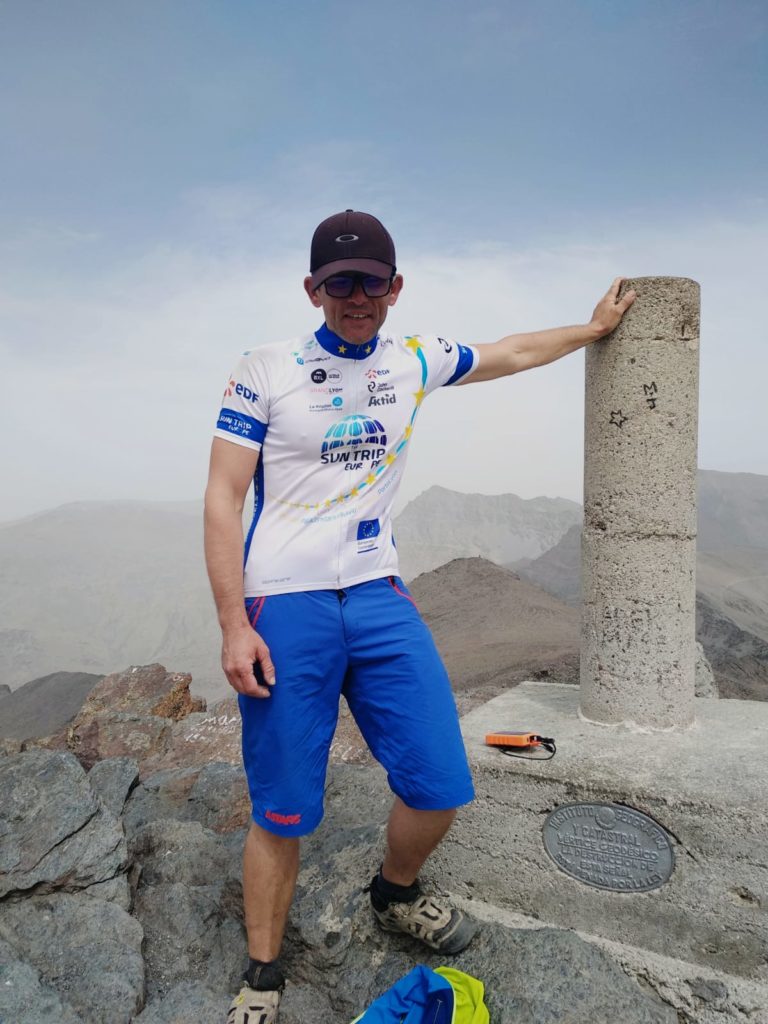