An essential tool for following the adventure, the live map has been the most successful this year. Today, we offer you a replay of the Georacing map, as well as a map allowing you to easily find the track of each participant (Thanks to Yann Cauquil for his help).

The first meeting was on June 1st 2021 in Lyon, for the launch of a giant 1200 km prologue towards Brussels! On the starting line, some participants who had left for the big Sun Trip Europe but also Sun Trip fans who were only doing the prologue. An adventure within an adventure, already followed on a daily basis by our 2021 reporters, Sophie Planque and Jérémy Vaugeois.

All images from the prologue on this link.

Report of the JT of France 2, in the forests of Alsace:

For the first time, the Sun Trip was leaving from Belgium and we wanted to do things in a big way, with events planned for almost a week, starting with a press point in Liège at our partner John Cockerill!

All pictures of the departure on this link

After passing through Namur, it was time for the official start in Brussels and Ixelles, received by the 1st vice-president of the European Commission, Frans Timmermans. The start was given on 16 June, with 36 adventurers finally on the starting line.

The video series produced for the European Commission on this link

2000 km separate Brussels from Riga and from the very first hours of the adventure the group bursts into life. At the front, the fastest teams start directly on ultra-fast bases, at 350 km per day! Behind them, several teams are experiencing technical problems and then it’s all over: Raf Van Hulle is not starting! The 2018 winner took part in the start, but finally decided to return home, arguing that he had a COVID vaccination scheduled for the next day… In the end, he will never start again! Philippe Passard also dropped out very quickly, technically not up to scratch, and at the same time the Austrian Patrick Tschigg gave up when he crossed into Poland, following a road crash. The young German Sebastien Meyer also stops in the first days, obviously not ready for the adventure.

Several teams decided to follow the route to Denmark and Sweden, with the couple Sofia & Nicolas even deciding to make the diversions to Finland! The first ones reach Riga in 5 days! Jean-Marc Dubouloz set a new daily record, with 450 km between 6am and 9pm! The first two were received by the mayor of the Latvian capital and inaugurated the Baltic Sea checkpoint, located on a cape north of the city.

More pictures of this first stage on this link

A new phase of 2000 km on the programme, with this time a more southern line to the shores of the Black Sea. On this part of the adventure, Valérie & Bertrand had to abandon the race, following a heavy fall and hospitalization for Valérie. Frédéric Koch had technical problems, but he didn’t give up.On the adventure side, the participants immerse themselves in the Polish countryside and some pass through the primary forest of Bialowieza, where the image team lingers to make this video.

In the first part of the peloton, we note the poker coup of Samuel & Baptiste who will be the only ones to pass through Belarus. Just before the passage of Ukraine, there was also a change of leader, with Romanian Emil Barbut having the honour of arriving in the lead in his native land. He is welcomed by the authorities of the city of Constanta. Behind him, some of the participants decided to go through the Carpathian mountains and all of them experienced a great change of scenery, far to the east of the European Union.

More pictures of this 2nd stage on this link

The gaps between the first and the last riders are already huge when they leave Constanta, more than 2000km! This stage will be marked for some by bad weather and unforeseen events. Three teams were broken up at this moment, Alessandra had to leave Pirmin for professional reasons, and due to conflicts Dirk Huyghe & Kris Wuyst but also Patrice & Jean-Louis, separated. The latter finally rolls with Stéphane Bujadoux. Further on Patrick Abrams and Frédéric Koch have to give up due to technical breakdowns.

The ascent of the Stelvio will obviously be the highlight of this part of the adventure. It represents a real challenge for everyone, both human and technical. The first two riders arrive there with a gap of 24 hours, and pass between the gusts. Bernard Cauquil showed his power with a climb in 1h32 worthy of the best cyclists in the world.

More pictures of the Stelvio passage on this link

The half Sun Trip

For the first time in 2021, the idea of a half-course was tested, a category without a “first come, first served” challenge, which at the beginning of the adventure was to involve only 4 teams. In the end, 10 teams decided not to do the Iberian part of the route, stopping directly in Lyon. For them, the Sun Trip Europe was a loop of approximately 7,500 km, through nearly 20 countries.

Samuel & Baptiste were the first to finish in this category, before mid-July, almost as fast as the leaders of the big course. The other Semi finishes were spread out until the end of mid-August, with the arrival of Robert Lucas.

Out of 36 starters, only 11 will flirt with the highest road in Europe! And we can say that none of them will regret the trip! The challenge was there because to reach the 3300m of altitude it was necessary to start by crossing the whole of Spain, for many under infernal temperatures. Some opted for the more direct routes along the Mediterranean coast, others tried routes further into the centre of the country. This part of the Sun Trip had a real taste of adventure and the duel between the two frontrunners was to be at its most intense.

Stage 5 : from Porto to the finish line

If the participants thought they had done the hardest part after passing the Pico Veleta, they were wrong! The road to Porto and then the road out of Portugal were the most difficult parts of the project. So much so that the two leaders decided to turn back after Porto to avoid the biggest differences in altitude. The others would almost all face the mountains and experience some difficulties. For all of them the fatigue was heavily felt in these last days of adventure. So none of them ventured to climb a big pass as they passed the Pyrenees again.

The arrivals in Lyon, for the main course, were spread out between 19 July (arrival of the two leaders) and 1 September (arrival of Herman Segers). 10 teams reached the finish of the main course, 8 of which were 100% solar. On the clock: more than 11,200 km and an average of 30.2km/h for the two leaders. Find here 3 videos made on the arrivals, then the results of all the challenges of this 2021 edition. 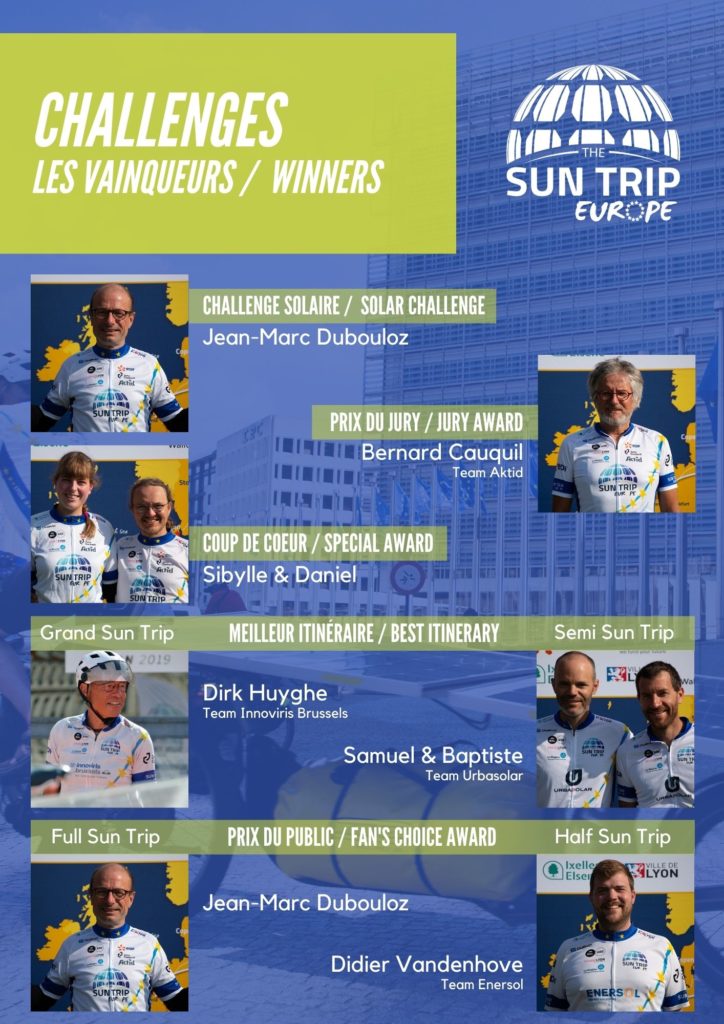 Technical stats of the participants

On the participants’ blog you will find several articles presenting the technical statistics of this extraordinary adventure.